Should Older Adults Use Corded or Cordless Phones?

Honestly, it depends! Corded and cordless phones each have their own advantages and disadvantages. Here is how to decide for yourself! 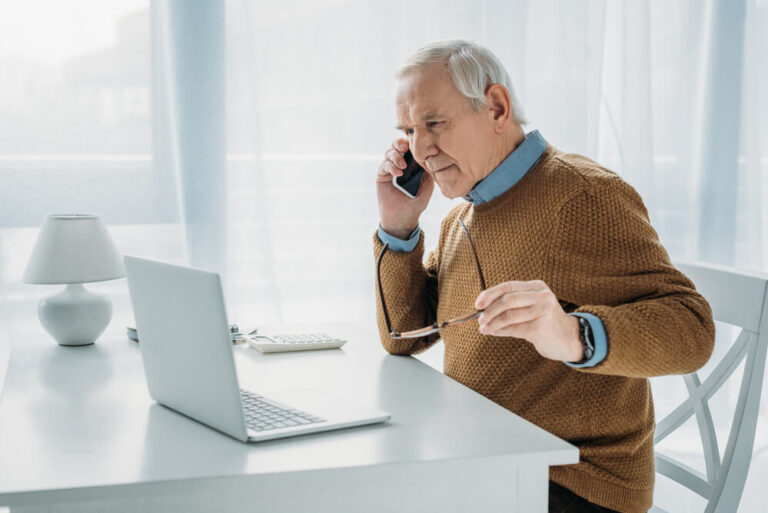 Honestly, it depends! Corded and cordless phones each have their own advantages and disadvantages. Here is how to decide for yourself!

Trying to decide if a corded landline phone or a cordless model is best for your situation?

There are advantages and disadvantages to each type. The answer may depend on the current or future problems the senior is having.

You may not have to pick between them either. Combination phone products have a corded phone base with cordless handset too.

Most of the advantages of a standard phone have to do with its larger size.

Standard corded phones usually have louder ringers and louder receiver volume. So, they are generally easier to hear.

But the one huge disadvantage they have is that long, stretchy cord. These cords invite a trip or fall to happen. People often add extra long cords to their phones: 20, 30, or even 50 ft long. They do this so they can move about while on a long call. .

Cords like these easily get wrapped around the feet. Senior falls can get serious quick. Avoid them at all costs.

If you think a corded landline phone is the best option, I have an entire guide dedicated to those. Click here to jump over to that guide.

I’ll bet you can guess the main advantage. No cord gets wrapped around their feet! Now the senior can move about while talking on the phone without having to worry about where the cord is.

This smaller size has both advantages and disadvantages. The small size and lack of a cord lets the senior take the phone with them as they move about the house. That way, they will always have a phone close if they need it. Many models even have clips on them so they attach to a pocket or belt.

But, there are problems with the smaller size too. Buttons and screen are not as large because there is less space for these kind of options. Sometimes the volumes aren’t quite as loud either. Although, all the cordless phones that I recommend for seniors have very loud ringers.

Why Are Some Phones Difficult to Use for Seniors?

Medical problems and the process of aging itself makes phones difficult to use. This is even the case for a phone a senior has used for years after a change in medical or mental status. The main issues are memory problems, vision deficits, and difficulty hearing. Problems like these really affect the ability to use both phones and computers for many seniors.

Choosing the right device though will help seniors overcome these problems.

Medical issues like dementia or Alzheimer’s lead to memory deficits. Often, seniors with these conditions cannot recall phone numbers – especially in an emergency.

Programmable memory buttons are helpful in this situation. Choose a cordless phone system that has memory dial buttons that are large as possible. Also, look for a phone that has one button set up specially for emergency calls. Often this button is red or larger than the others.

Program this button to automatically call a loved one or relative. Another option is to Program it to call 911 as long as the user isn’t likely to make false calls to them.

As our vision fails us, phones become hard to see and use. I’ve experienced this with my cell phone even in my mid-40’s. Medical issues like cataracts and retina problems make it even harder to read small print. This leads to misdialed numbers, embarrassment, and even frustration.

Thankfully, a large button cordless phone for the visually impaired is very helpful for these seniors. In addition to the just making the buttons larger, the print on these phones have better contrast too. For example, the numbers and words are dark in color and printed on a white background – or vice-versa.

Hard of Hearing or Hearing Loss

Aging related hearing loss is particularly frustrating for senior. Continually asking people to repeat themselves is aggravating – for both parties. Hearing aids may not always help because some phones are not compatible. If you have ever heard those whistles and chirps, you know they make conversation impossible.

Fortunately though, there are many phones made specifically for seniors to address these issues. Check out my guide to phones for seniors for more information.

1 thought on “Should Older Adults Use Corded or Cordless Phones?”