The easiest to use cordless phones have big, bold buttons that are easy to see, one touch speed dials for emergencies, loud speakerphones, and are expandable. Plus, they shouldn’t have too many buttons to reduce confusion. Here are some simple cordless phones for seniors who just want the basics. 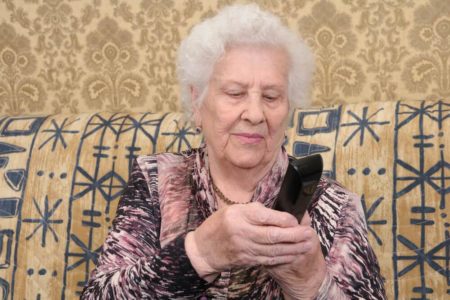 While mobile phones are more popular than ever, many seniors still use landlines. If you’re looking for a phone for yourself or a family member, you’ll find that a cordless device is your best option. Cordless phones offer flexibility and functionality that other landline phones can’t offer.

More importantly, cordless phones are easy for seniors to use. Many of these phones have larger buttons, which means seniors with arthritis or limited dexterity can use them without issue. The best cordless phones can also be programmed, allowing users to dial numbers with just one push of a button.

It’s important for seniors to be able to make essential calls when they need to. If someone has fallen or is suffering a medical emergency, an easy-to-use cordless phone could actually save their life.

These simple cordless phones for seniors are some of the best options on the market.

Here are my reviews of basic, simple, and easy to use cordless phones for seniors that have senior friendly features like volume boost, speakerphones, and more!

This cordless phone was specifically designed with seniors in mind. It comes equipped with a smart call block directory that can save up to 1,000 names and numbers. The phone also has an extra-loud ringer, which means even people that are hard of hearing will be able to hear incoming calls.

The phone also offers a number of other features that are senior-friendly, like photo-dial for frequently used numbers and oversized buttons. Plus, it has a large, easy to read display screen, and it is specifically designed to be easy to use. Seniors should be able to hold their phones comfortably even during long calls.

There are some complaints about the button placement on the phone. The mute button is located above the talk button, which means that some seniors may hit the wrong button when they’re trying to answer their phone. Although these issues should be taken into consideration, it’s hard to deny that this is one of the best cordless phones for seniors on the market.

For seniors with very poor vision, even phones with larger displays can be difficult to read. This phone is ideal for seniors that have had issues with some of the other cordless phones on the market. The phone has high-contrast numbers that are extremely easy to read, even from a distance.

The phone was designed with comfort in mind. The keys are contoured and made from a softer material, which means they’re easy to use and touch. The phone even has a belt clip, which means seniors can talk to people on speakerphone without having to keep their phone in their hands. There are also 10 ring tone settings, which can all be played at a higher phone.

Although the phone does have an audio boost feature, some reviews say that it is difficult to use. There is no way to save audio boost settings; the button must be pressed during each call to increase the volume. Still, this phone is a wonderful option for elderly users that are hard of hearing or people with vision issues. It’s a cordless device that offers the kinds of features that seniors really need.

Seniors that primarily talk over speakerphone will really appreciate the extra volume that this phone provides. It is able to amplify incoming sound by up to 50+dB, which means it will always be easy for seniors to hear the person they are talking to. The phone also allows seniors to amplify the volume of their own voice by up to 15dB.

The phone comes equipped with a dual power battery, allowing seniors to make phone calls even when the power is out. The oversized buttons that are easy to read and press. The phone is even hearing aid compatible.

This phone is equipped with all kinds of features, which some seniors see as a perk. However, there are other seniors that are overwhelmed by all of the buttons they have to press. This phone might not be the best choice for users that struggle with new technology, but it’s certainly an excellent option for people that are hearing impaired.

This phone system has a large, easy-to-read display, making it an excellent choice for seniors with vision problems. It also has many helpful features, including a power conserving mode that preserves battery life and caller ID and call block functionality. The phones also offer a silent mode, which means ringing can be disabled when someone needs to sleep.

The best feature this phone offers, however, is dual handsets. The single system offers two separate phones that can be placed in different rooms of the house. Because the phone has two handsets, it’s far less likely that one of the phones will be lost or misplaced. Having two handsets also means that seniors won’t have to walk a long distance in order to reach their phones. Plus, you can expand it up to 6 handsets in total.

Some reviews report that they experience call interference when the handset base is placed near other electronic devices. Because of this, you’ll want to show some caution when setting up these phones. Still, this excellent Panasonic cordless phone system is a breeze to set up and is ideal for elderly users. Having two handsets can really make a difference.

Easy to Use Cordless Phones with Answering Machines

I’ve had some requests for some simpler cordless phones that also have an answering machine built in. Of course, the addition of an answering system adds complexity and more buttons too. But, here are the easiest to use models that I could find.

If you’re looking for a senior-friendly cordless system that has a built-in answering machine, you’d be hard-pressed to find a better option than this system. This system offers not one, not two, but three handsets. The phones can be placed throughout the house, which means that seniors will always have a phone nearby.

The phone has a digital answering system that can save up to 22 minutes of messages. It also has a backlit keypad, making it easy for seniors to read buttons even in dim lighting. The phone is caller ID compatible and can save up to 50 names and numbers. Each handset has speakerphone functionality, which means users won’t have to grip their phone as they talk.

Some reviews report issues with the sound quality on the handsets, which means this might not be the best phone system for users that are hard of hearing. However, these phones have plenty of excellent features. Best of all, the system can be expanded. If you’d like, you can purchase additional handsets that you’ll be able to use with your phone.

This Panasonic phone has volume boost control features, which means seniors can clearly hear callers while ensuring that they’re being heard as well. It also has a slow talk feature, which makes it easier for seniors to understand every word that they are hearing. The phone has a large backlit display and a keypad that is easy to read and use.

The phone is also equipped with noise reduction technology, which means the phone can drown out background noise in a call. This is an extremely useful feature for users that are hard of hearing. Potentially distracting sounds, such as the sound of a television, won’t play during the call. The phone also has its own answering machine and talking caller ID.

Some reviewers have said that the phone isn’t intuitive to use. It may take time for new users to adjust to this device. However, the unique features that it offers, like slow talk functionality, help this cordless phone to stand out from other options on the market.

What Features Make a Cordless Phone Easier to Use for Seniors?

Seniors have varying levels of needs, so these are some general options that make phones easier to use for all of us really!

Big Buttons that are Easy to See and Read

Big buttons are also easier for someone with arthritis or hand tremors too because they are less likely to push the wrong button. So, there is less chance of a misdialed call.

Too Many Buttons Can Get Confusing

Speed dial buttons allow a call to be made at the touch of a button. In the event of an emergency, this can be life saving.

These buttons should be easy to access. Ideally, they should be one-touch with a label indicating who the button will call. Designate one button as an emergency contact. If the phone doesn’t have an emergency button, put a piece of red tape on it so the senior will know to push it if they need help.

Systems that use screens to cycle through a list of saved numbers is good too because of the number of contacts you can save. Just make sure the user understands the menu system and how to use it.

Of course, memory dialing is convenient too. It is also an important feature in phones for seniors with dementia or Alzheimer’s.

Simple Speakerphones are a Great Option for the Hearing Impaired

Speakerphones are often easier for seniors to hear. Especially seniors with hearing aids because there is less chance of interference. If the phone has a speakerphone in the base, calls can be answered even if the handset isn’t close by.

I recommend multiple handsets. That way, you can have one in the bathroom, one in the bedroom, and one in the living room. You are always near a phone in case of emergency. Also, there won’t be any sprints to find the phone when it rings. This reduces the chance of a fall as you hurry.

It’s important to make sure that seniors are safe in their own homes. The right cordless phone can provide plenty of protection. If a phone is easy to use, seniors will always be able to call for help when they need it.

Sometimes, a cordless phone isn’t the best option though. You might want to consider a corded landline home phone for some elderly people.

All of these cordless devices are perfect for elderly users. They’re simple to use, reasonably priced, and have plenty of appealing features.

Do you know of another simple cordless phone that you recommend for seniors? Any tips or advice you would like to add to the conversation? Tell me about it in the comments below!