Weighted Blankets For Restless Legs – Do They Help?

Income Disclosure: I may earn a small advertising fee (at no extra cost to you) if you purchase items through links on this page. Learn More.

There is nothing quite like your legs wanting to go for a jog while you want to sleep to keep you up at night. The problem is that while restless legs syndrome is not exactly a serious condition, the resulting sleep deprivation can cause in a long list of physical and mental health problems.

You may feel irritable and have difficulty concentrating after one bad night. These psychological symptoms can quickly become elevated into confusion and delusions after a few nights of poor rest. Physically, your body is experiencing increased stress which increases blood pressure, the risk of contracting heart disease and even type II diabetes.

Although science is wary to confirm this, it is generally believed that sleep deprivation can be fatal.

So what exactly is restless legs syndrome, what are the causes and what can be done to prevent it so that you can sleep better?

What Is Restless Legs Syndrome?

Restless legs syndrome (RLS) is an urge to move your legs that is often uncontrollable. Different people may experience this urge to varying degrees and may describe the sensation differently. RLS occurs even if you are tired and in many cases, the urge is much greater at night or when lying down to sleep.

There is currently no single diagnostic tool or test to diagnose RLS and diagnosis is symptomatic according to patient reports.

No exact cause for restless leg syndrome has been established to date. However, it is believed that lifestyle choices and bad habits may aggravate the condition. A sedentary lifestyle, lack of exercise, unhealthy diet, a poor bedtime routine and consuming stimulants such as caffeine and nicotine may contribute to the condition. Alcohol consumption can also result in restless legs.

Scientific studies also suggest that RLS may be caused by increased levels of dopamine. While dopamine is commonly associated with stimulating calm and relaxation, it also controls muscle movement and increased levels of the neurotransmitter may be responsible for restless legs while the remainder of the body is tired.

What Can Be Done To Relieve Restless Legs Syndrome?

It is normally recommended to make healthier lifestyle choices to prevent the symptoms of RLS. Establishing a bed-time routine is also advisable. Avoiding stimulating activities such as watching TV or being on your phone and rather listening to calming music or dimming the lights contribute to better sleep (at least an hour before bed).

Avoiding stimulating foods and beverages such as coffee or tea and sweet treats at least 3 to 6 hours before bed is also a good idea. Not consuming alcoholic beverages can also help alleviate the condition.

Some medications are available to treat the condition or improve sleep. However, these medications have side-effects and are not recommended where the condition is not considered to be severe or for use over extended periods of time.

It is recommended to visit a doctor if you are experiencing symptoms of RLS. The symptoms may be a result of a more serious underlying health condition such as diabetes, anemia, kidney disease or spinal cord conditions.

Weighted blankets are currently being researched as a natural and viable treatment for curing restless legs syndrome.

What Are Weighted Blankets?

Weighted Blankets are quilts with pockets to which beads, rice, sand or other elements are added to increase the weight of the blanket. The blankets have been used in hospitals and clinics for decades to calm and relax patients. Weighted blankets have been known to help seniors with conditions that result in agitation or aggression such as dementia and Alzheimer’s Disease.

There are reports that they help with anxiety and even the symptoms of menopause too.

These actions as well as the increased levels of serotonin and dopamine in the body, aid sleep.

Weighted blankets have been found to reduce the urge to move the legs and encourages better sleep. The effects of deep pressure stimulation is believed to be the reason for this. When the parasympathetic nervous system is turned on, the muscles in the body relax and are calmer.

De-activating the sympathetic nervous system reduces the presence of cortisol – the stress hormone – in the body. This alleviates stress and reduces anxiety and the release of other hormones and chemicals that may be telling the legs to move when it is time to sleep.

The blankets also increase the release of melatonin which is the body’s natural sleep aid. Melatonin tells the body and the mind (including the legs) when it is time to sleep, how long to stay asleep and when to wake.

Deep pressure stimulation also increases the release of serotonin which calms and relaxes and inspires a sense of overall wellbeing. Using the blanket has been described as getting a really big hug and helps with falling asleep and staying asleep.

What Are The Best Weighted Blankets For Restless Leg Syndrome?

The following weighted blankets as among my favorites to help alleviate the symptoms of restless legs syndrome: 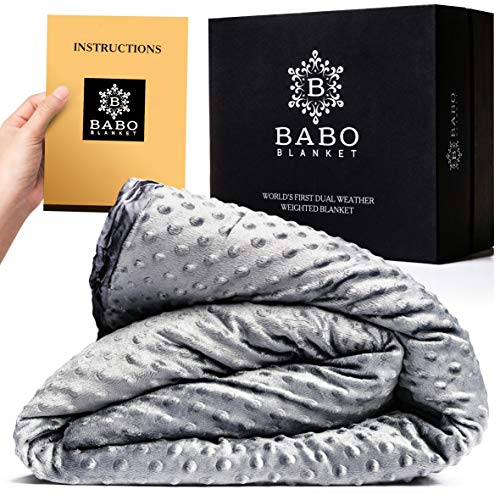 I like this blanket because it weighs only 15 pounds. In general, the weight of a weighted blanket should be equal to 10% of your body weight plus a pound or two. This makes the blanket ideal for those between 120 and 152 pounds.

The cooling effect is a bonus especially for those who have difficulty controlling their own body temperature. Weighted blankets can become hot and itchy. The blanket is reasonably priced and available from Amazon.com. 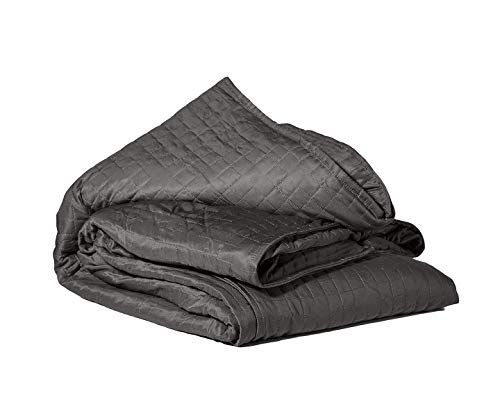 $199.00
See it at Amazon Learn More at Gravity Blankets

The gravity blanket offers single blankets that range in weight from 15 pounds to 25 pounds. There is also a queen/king size blanket available weighing in at 35 pounds which is distributed across the blanket. It is available in grey, white and navy and has a comfortable, soft fleece covering. The blankets are reasonable priced and available from gravityblankets.com. 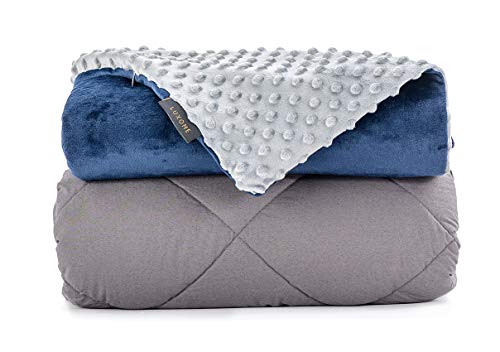 Luxome offers a wide range of different weighted blankets starting at just 8 pounds in weight with a maximum of 30 pounds for an extra large blanket. The smallest 8 pound blanket is ideally suited to children, teens, small adults or the frail elderly. The blankets have removable covers for easy cleaning and come in a wide range of colors and designs. Alternatively, fully integrated weighted blankets are available that require no cover. Luxome offers the ultimate in variety and range.

While there is no definitive evidence, many people with restless legs report relief while using weighted blankets. So, it might be worth giving it a try if you haven’t found relief for your symptoms.

If you give it a try, report back and let me know if using a weighted blanket helped your restless legs.