These simple card games for seniors are easier to play and requires holding onto fewer cards.

Almost everyone likes to play card games. For seniors who have arthritis or mobility concerns, playing cards is a fun option because playing cards are very easy to pick up. The large print on the cards is also easier to see than the fine print of most other games, which is another advantage for seniors.

So, what are some fun easy card games to play? The games listed below are not just card games for old people, but fun for people of any age!

Why Should Seniors Play Games?

Games aren’t just a fun way to pass the time. Playing card games can help to improve memory and concentration, and even prevent or delay the effects of Alzheimer’s. Simple games can keep seniors with dementia engaged and mentally active. Social gatherings for card games can also give seniors a much needed social outlet. Groups who gather regularly give participants a sense of community and belonging, which improves health and well-being. Too often, seniors become isolated because of changes in their physical health or the loss of their social groups.

If you or a senior family member enjoys the challenge and bonding that comes with a good card game, you might be asking yourself, “what are some fun card games that I can play with my elderly loved one?” Below are a few ideas to help you out.

Simple but Fun Group Card Games Anyone Can Play

Here are a few games that are easy to play and easy to learn also.

Snap is a fairly simple game that is easy to play, even if your senior has problems with their memory or concentration. Playing Snap may even help them with these issues.

Snap can be played with any deck of cards laying around the house. The cards are split between the players who turn them over in a pile in the center. If two cards are put down that are the same number or color, the players race to slam their hands down on it to get the entire pile. The player with the most cards at the end wins.

Just a word of warning here, be careful when you slam your hands down or someone could get hurt.

Gin Rummy can be played with 2-6 players. It involves drawing and discarding cards trying to get either a meld (3 cards of the same rank) or a run (which is 3 or more cards of one suit in sequence).

The point of the game is to run out of cards, with all the cards put down in melds or runs, in combinations that make higher points than your opponent has. Rummy has a number of variations, including Gin Rummy and is a very popular game among the older generations.

You can learn the complete rules and different game variations of rummy here.

Crazy eights is a fun, simple game that can be played with 2-7 players, but if you have more than 5 players, you’ll need 2 decks of cards.

Each player gets dealt 8 cards (or 7 if you only have 2 players) and the rest of the deck is set face down on the table. The first card on the deck is turned upward, and players discard their cards by matching theirs with the suit or rank of the top card on the deck. If you can’t match the card, you draw from the deck until you can.

The objective of this game is to get rid of all of your cards first. You can also play an 8 card at any time (hence the name) and declare what suit you’d like the next player to match.

This is another simple card game dating back to the Victorian age.

If you’re playing with a standard deck, remove one of the cards so that its pair is “unmatchable.” The point of the game is to get as many pairs of cards in your hand as possible, and not stuck with the unmatched “old maid” card at the end. Due to the name, the most common card to discard is a queen.

The way it works is that a dealer deals out all the cards to the players. Players then go through their cards and place any pairs they have (by rank) face up. Then, starting with the dealer, each player offers the player to the left of them their hand face down, and that player draws a card of their choice and adds it to their deck.

If it makes a pair in their hand, they place it face down with their others. The process continues until one person is stuck with the unmatchable card.

These fun card games are a bit more difficult than the ones above but they are great choices for seniors to play as a group.

There are many varieties of bridge, so it can be adapted to your seniors’ preferences or even to their limitations if needed. In the basic version of bridge, players work in teams and the objective of the game is to put down the highest card in the relevant suit. There are a number of complicated rules to this game, and it may take beginners some time to understand, but once they do, it can be fun and highly competitive.

If your seniors prefer a game that’s more about strategy, luck, and lying, poker may be what they’re looking for. In poker, the cards themselves are almost less important than the ability to read other peoples’ reactions, strategize and bluff your way to victory. There are also lots of variations and additional rules that can be put into place if your senior wants to add interest to the game. Even better, poker requires betting, and if you play for money, it can be a very rewarding way to spend an evening.

Blackjack is a fairly simple game that almost everyone knows. The dealer deals out the cards and each of them are worth a certain number of points. The players try to get the points of the cards in their hand as close as possible to 21 without going over. They need to get closer to 21 than the dealer, or get 21 points with the initial two cards given to them, to win the game. This is another game that can involve some betting, just to add some stakes to the game.

Cribbage is a very complex game that requires a game board as well as playing cards. This game could be out of reach if your senior has problems with their memory or ability to concentrate. It can be played with 2-4 people. The rules and procedures change depending on how many people are involved, but the point of the game is to get 121 points. The score is kept by pegs which are put into the game board. Each card gets a certain number of points alone and even more points when it is in certain combinations.

Canasta was very popular during the 1950’s, which makes it perfect for seniors as they’ve probably played before. It is usually played with an even number of players with two players acting as partners. The main goal is to try to collect 3 or more cards of the same rank. These are called melds. Each meld gives the player a certain number of points. When the game ends, the partners with the most points are the winners.

There are different versions of this game, and it can be played with only two players, but canasta is more fun and challenging in teams. This game not only encourages teamwork, it also involves strategic thinking and scoring, and can be a good way to create close bonds, as well as some friendly rivalry.

Pinochle requires a special deck of 48 cards or one that has the irrelevant cards removed. This game can be played with 2-4 players. In Pinochle, each card has a certain value and the point of the game is to create combinations of cards that get the highest number of points. This game can be fast paced and requires that one of the participants keeps score of the points accrued during each round. Best of all, most seniors will probably know this game and won’t have to learn a new procedure and set of rules before enjoying it.

Challenges Seniors Have When Playing Cards

There are various reasons why seniors who once loved playing card games no longer show this interest. A few common reasons are:

As we age, our vision tends to decline. Many seniors may not be able to see the cards clearly any longer, and may be afraid of making a mistake. It can be very embarrassing for seniors to admit that they need help or can’t do the things they used to, so they just stay away from old fun habits like this.

For some seniors, grasping a handful of cards hurts. Swollen, arthritic joints hurt even more when trying to grip small, slick playing cards. But, there are tools available for these folks so that they can continue playing the games they love.

One option is playing games like Solitaire online. Many group games are also available in online versions where they can play against a computer opponent. This takes the physical grasp of the cards out of the game, but they still get all the fun.

A great tool for helping seniors play card games without having to hold onto a handful of cards are playing card holders. There are different designs and styles, but they all basically have a slot where the cards are inserted and held by the user. Curved designs allow the senior to see all their cards without other players looking at them. The playing card holder for elderly people below is curved and made out of a really nice wood. The one next to it is straight, but big enough to hold jumbo cards as well. 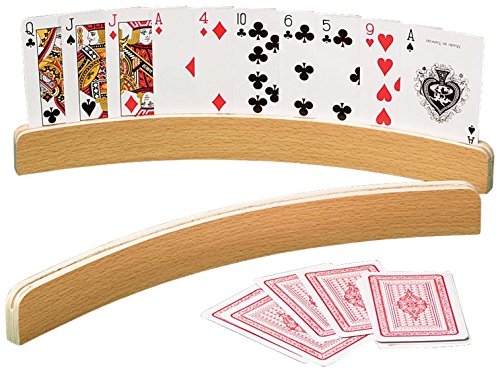 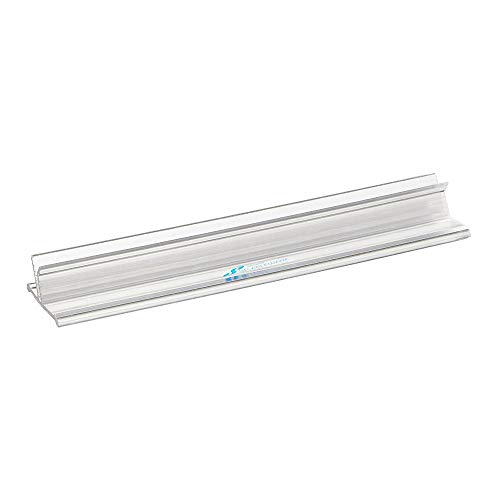 Some seniors also lose the hand dexterity needed to shuffle cards. Arthritis and hand weakness are common causes for this. An automatic card shuffling machine like the one below is a huge help for this. 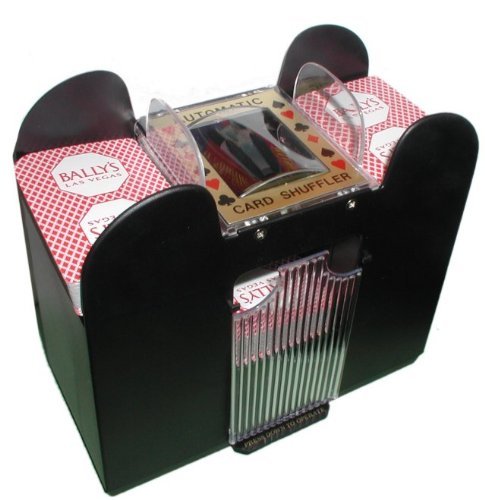 It is no secret that declining vision affects many seniors and elderly people. There are many causes for this from natural aging to cataracts to macular degeneration. Fortunately, there are great options available to seniors with failing vision to get them playing cards again. As a matter of fact, there are a lot of games that are now available in large print editions – even large print adult coloring books!

For seniors who less significant vision loss, playing cards that are the same size as standard cards, but with larger print, are useful. The numbers and suits on these cards are large, which makes them easier to see when fanned out. 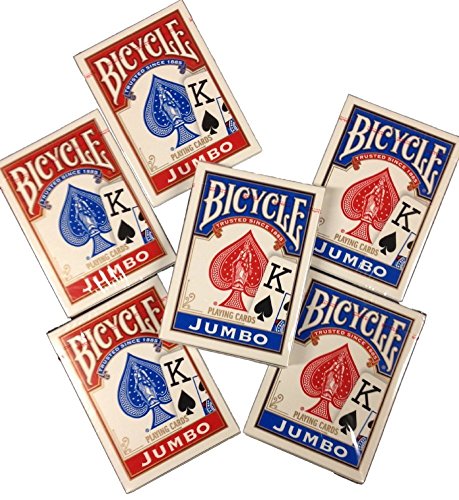 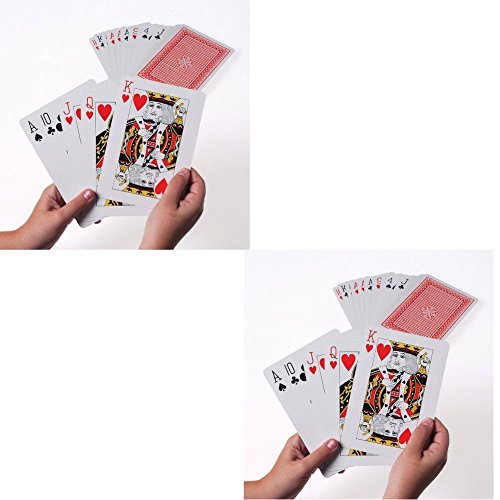 As people get older, they can also get more isolated as friends and family members who once gave them the social contact they needed become unavailable. Seniors may also lose interest in many of the activities that once gave them social connections and fulfillment. This creates a viscous cycle, further decreasing their opportunities for social contact.

If they want to stay happy, healthy and get all of the benefits that social contact can bring to their lives, seniors must find other ways to connect. Getting involved in easy card games or even board games, and groups that play them, are a great way to find those kinds of bonds and have fun while doing it!

Do you have another card game that is fun to play with seniors? If so, please let me know in the comments below!

Other Guides You'll Want To Read

1 thought on “Fun and Simple Card Games for Seniors”

Join Me on Social!