9 Types of Games for Elderly People to Play Alone 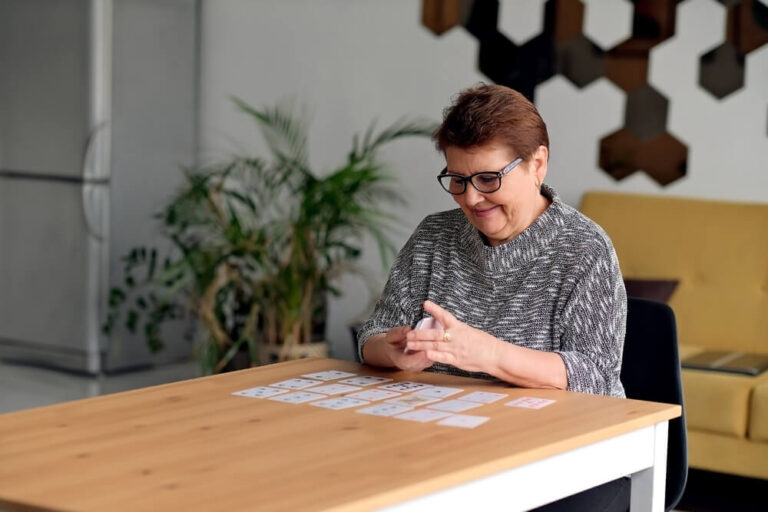 As people get older, they may find themselves with more alone time than they are used to. Maybe the kids are grown or have moved away. To pass the time and be entertained, there are many games to choose from.

Plus, games have other benefits including improving mental alertness, attention and focus. They can even help with hand-eye coordination and fine motor skills too.

As mentioned before, solitaire is a very popular card game the elderly can play on their own. However, there are so many more that they can also play on a computer by themselves.

Examples of popular online card games include rummy, bridge, pinochle, and scrimmage. Computers and tablets make it possible for the elderly to play games that they would otherwise need to have other people play with them.

When seniors think of board games, they are usually thinking about games like Monopoly. Most board games usually require another person on the other side though.

However, many board games like Chinese checkers, backgammon, Scrabble, and even checkers and chess can be played against online players or against computer-controlled players. Even games like Hive or even Trivial Pursuit, are possible with modern technology.

When video games came out in the 1980s, most were actually designed to be played solo. For example, when the Atari first came out, kids would spend hours playing these games without anyone around. This subsequently led to the development of Nintendo, and all of the other console games, including PlayStation 4. My own grandmother once had a self-confessed Pacman addiction!

Some elderly folks may not be interested in these games unless they were young adults when these video games first came out. But, often, older adults are up for new experiences. If that is the case, you may want to consider going to a local garage sale to look for old-style Atari games that they will enjoy.

If you are looking for a new system, the Nintendo Wii consoles are senior-friendly and offer lots of game titles that older adults would enjoy. Plus, many Wii games also have a physical movement needed to control the game so they won’t have to become a couch potato.

Many of your favorite games probably involve the use of rolling dice. But you might not realize many dice games are as fun to play alone as with others. For example, there are solo variations for both Yahtzee and Farkle.

In many games, the dice rolling can be done digitally in computerized and online versions of these games. By simply clicking the mouse, the dice can be rolled, and they can play against opponents even if they are alone.

Whether you are looking at word jumbles or jigsaw puzzles, there are many games that the elderly can play alone. Puzzle games, mazes, and sudoku are just a few of the many that are currently available. These games are a great choice for bedridden seniors who don’t want to deal with parts, cards, or dice that could get lost.

In particular, word search puzzles are very popular. This could be anything from crossword puzzles to those that will have been find a secret word or phrase. If you are spending a significant amount of time alone and really enjoy puzzles, take a look at a puzzle magazine subscription so you will have a constant supply of new puzzles to keep you entertained.

There are also an abundance of apps that they can download directly to their phone and play if they prefer doing it that way. Computers are also equipped with multiple games that they can access, allowing them to have fun by themselves if no one else wants to play.

Perhaps one of the most unique handheld games in history is the Rubik’s cube. It is a puzzle that requires you to remember patterns, colors, and be adept with your hands. You can either play in a group or competition, trying to beat out everyone else, which can be done by completing the full colors on each side before everyone else.

There are patterns that you must remember, and if an elderly person has arthritis, this may actually help them exercise by moving their hands rapidly. It is an exciting game, regardless of whether or not it is the Rubik a similar puzzle game that they can play.

When people think of mental they might be considering games like Pictionary. This is a game where people are acting like mimes, enacting different movements and events without any words that are spoken in order to indicate what they are referencing.

Other types of mental games include those that involve matching photos or words, math, remembering different locations, or games as complex as the ever popular Jeopardy. These are the ones that older people tend to like as it will test their ability to comprehend things and also use their memory.

Finally, seniors and the elderly should get outside as much as possible. Games such as shuffleboard, pickle ball, water balloon toss, and horseshoes are just a few that they might be interested in playing.

Croquet is a popular yard game that can be played alone, allowing you to practice up on their skills. Other possibilities include throwing a frisbee or playing beanbag toss games like cornhole. You can practice for your next group outing while improving dexterity and coordination. Yes, outdoor games are much more fun when played with other people, but most can be played – or at least practiced – solo too.

RELATED: What Are The Best Sports for Seniors

By considering these options of games that elderly people can play alone, you may find a few that are interesting to you. Many of these games will also encourage you to use your mind, improve hand coordination, or just get out and move around which is what most older folks should do as much as they can.

Can you think of a solo game for seniors that I missed? Please share your ideas in the comments below!