Skip to content
Entertaining the Grandkids | Games for Seniors | Grandparenting

11 Games To Play With Teenage Grandkids

Games can be a fun way to spend time with your grandkids. But what about when they become too old for Candy Land? Here are some fun games to play with your teenage grandkids that you will both enjoy! 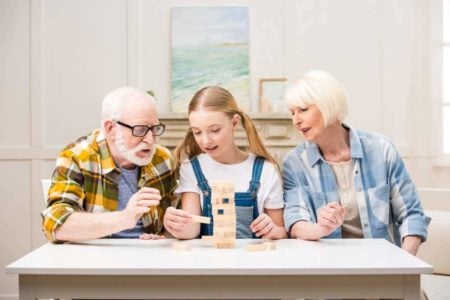 If you’re a senior with grandchildren, you were probably thrilled when you found about the first one. As more came into the picture, any chance to spend time with them likely became a high priority for you. Your own kids probably cherished any chance for your to spend time with the grandkids, too, since it meant they got a break or at least some badly needed help along the way. Admit it, spending time with grandchildren is just plain fun and one of the better parts of the golden years.

How long does the fun last though? They eventually grow into tweens and then actual teenagers? What activities can you do with them that they don’t get bored with, turn their nose up at, or just consider too juvenile?

Games to Enjoy With Your Grandchildren

If this is a challenge for you currently, then keep reading to learn some fun games you can play as a grandparent with your tween/teen grandchildren!

The names of the properties and even the pieces might change, but the game really doesn’t. Nearly everyone knows how to play this, and even younger grandchildren that don’t can pick up on it. It’s certainly a bit more sophisticated than the simpler board games of their younger years.

You don’t have to use it as a means of teaching finance, money, and math, but it does have educational value. As a grandparent, though, it’s a great chance for you to teach your descendants other valuable skills like negotiations, setting financial goals, and how to handle money in a competitive environment.

One of the best things about monopoly is that there are so many versions available. You can surely find one that interests your teen grandchild. Here are just a few examples:

Decide on a number each player will shoot and then see who nails the most of them. It’s a gentle enough exercise for most seniors and something nearly everyone can do if you have a hoop set up.

This one doesn’t have to take you far outside, but it does help kids stretch their legs and get some sunlight and fresh air.

Nearly everyone loves swimming, and it’s a great way for you to be social with your grandkids and get exercise at the same time. Tweens and teens still love this game since they can better use the skills they are developing.

Traveling a long distance with the grandchildren in tow? Start up this classic game. Decide in advance if you’re skipping X or if it just has to be a letter in the word. Each person calls out words from other vehicles, signs, billboards, and bumper stickers starting with the next letter of the alphabet. Towards the end, whoever is ahead of everyone else can sweat it out waiting for the Construction Zone sign or something else with a Z while everyone else slowly catches up.

YouTube has a famous serious of videos where a grandson and his grandmother play various pongball tricks, and they’ve gathered millions of fans. Why not set up a family challenge? Film your own entertaining video on your smartphone, and have your kids do the same. Post the videos on the same date and then see who has the most views after a month to win a prize.

Your tween and teen grandkids are likely to have smartphones. They’re even more likely to be glued to them all the time. Rather than compete with the technology, put it to play. Come up with a list of things you want the grandkids to photograph, and then have them do it as a photo scavenger hunt. Whoever is done first can be the winner, or just whoever gets the most done within a certain time limit.

Even teens love showing off what they can do or what they’ve recently learned. That doesn’t change much from childhood. Sometimes, it’s even more prevalent as they struggle to develop self-confidence or look attractive to other boys and girls. Why not set up a talent or variety show where every member of the family can spend a few minutes entertaining everyone else with something that they love to do and are good at? Anyone that doesn’t want to participate can be a part of the judging panel, scoring every talent and then determining the winner.

Poker hasn’t completely faded as an on-trend card game just yet, and many young people are curious about it. If you’re all waiting on a batch of grandma’s cookies to bake, why not gather around the kitchen table and teach them how to play? Your grandkids might think you’re just the sweetest thing and love you lots, but this is your chance to show off your serious side and use some of the poker face you’ve developed throughout your adult years. If grandma’s cookies are done, why not use them as chips for actual wagers?

10) Start Up Your Own Movie Club

Hollywood is in a dearth of creativity right now. 2019 was especially bad, as it appeared that only two single films throughout the whole year hit blockbuster status without being reboots, sequels, or franchise installments. Given how many remakes are happening, why not start up a movie club?

There might already be debates in your family whether or not the original version of a movie was better than the most recent or modern version. Why not sit down with the kids and watch both? Then, everyone has seen both, and you can have the ultimate cinema critique and film debate. It’s a great way to kill a rainy day.

Have everyone rate the movies once watched, and then tally the scores. That way, you can settle for once and for all which versions are best.

ALSO READ: Things to Do With Your Grandchildren in Winter

It is a safe bet that your teen grandchild plays video games. Why not join them?

Have them bring their game system of choice over and hook it up to your TV. They can show you how to play their favorite game. They might even think it’s cool their grandparent plays video games with them! Just tell them to go easy on you first!

ALSO READ: Things to Do With Your Teenage Grandsons

You deserve to enjoy your retirement or golden years, and games are supposed to be fun. Tweens and teens also love games, so play all the ones you can with them in order to not only spend time with them but have so much fun that they keep begging to spend more time with you.

Prior to being fortunate enough to work on Graying With Grace full-time, I served disabled adults, seniors, and the elderly in the durable medical equipment industry for over 25 years. In my own quest to make it to 100, I grow my own food, love to be outdoors, and exercise when I can. I am also a lucky dad to four awesome daughters and grandfather to three pretty terrific grandkids.