The best cordless phones for seniors are easy to use with big buttons that are easy to see, lots of volume amplification, a choice of loud ringers, plus emergency dialing features. Here are my favorites. 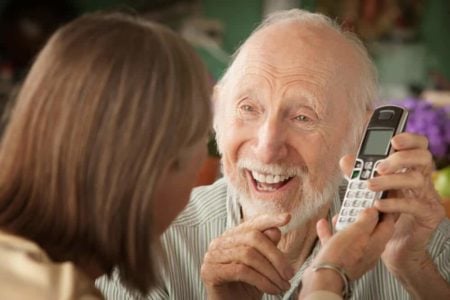 Cordless phones also offer several advantages for seniors. One of the most important benefits is that can carry these phones with them wherever they go in the home. That way, they always have a phone with them.

But, there are some drawbacks too. They usually have smaller buttons and are often hard for some seniors to use.

I’ll go over these benefits and drawbacks in the buying guide below. I’ll also talk about the important features you should consider when shopping for a senior friendly cordless phone.

What Are The Best Cordless Phones for Seniors and the Elderly?

Here are my reviews of the top cordless phones for seniors along with an explanation of why each model made my list. 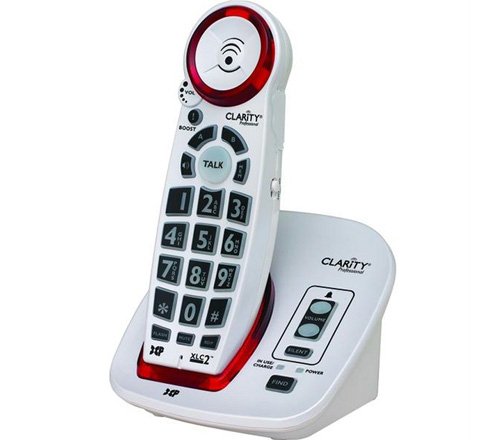 This phone has tremendous benefits for older adults that make it much easier to use than the cordless phones you may see at your local retail store.

First, take a look at the buttons. They are big with bold white print on against a dark background. This makes them so much easier to see.

But, some of the features that make this cordless phone a great choice aren’t easy to see in a picture like the loud ringer settings, talking features, and safety features.

It worries everyone in the family when a senior doesn’t hear the phone ring. Some people assume the worst! But, with the Clarity XLC2+, you can choose how loud you want the phone to ring – and the loudest setting is VERY LOUD. As a back up, the red lights on the handset and the base both flash for a visual cue that the phone is ringing.

Speaking of being loud, the phone boosts call volume up to 50 dB. The built-in speakerphone has its own volume amplification system too.

For older folks who like to screen their calls or don’t want to be bothered to “renew their car warranty”, the base announces – out loud – who is calling via the talking caller ID function. It even says the name or number of the buttons too when they are being pressed. These are great for people who don’t see so well and it makes up for not having an LCS screen.

Some other important features for older adults is that it has a battery back up so that seniors can still call if the power is out. You can also buy extra handsets so that there are multiple phones throughout the home.

Are there drawbacks? The main drawback is that there are a few more buttons than some seniors need. Also, the phone doesn’t have separate and easily located memory dialing.

This video highlights many of these features of the Clarity XLC2+: 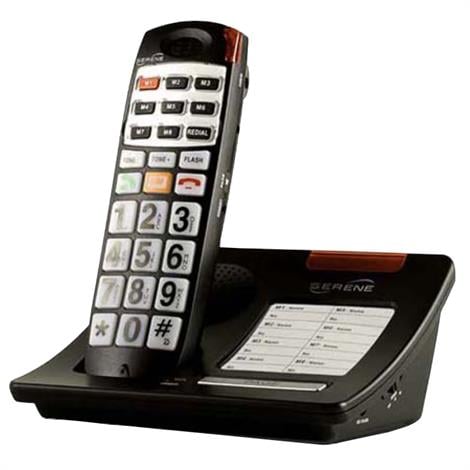 The buttons are big and easy to see and even color coded (green to answer, red to hang up). Older adults whose vision may be degrading will love how easy everything is to see. But, there are a lot of them which may intimidate seniors who are technology averse.

Everything about this phone is loud too. Call volume is boosted up to 40 dB through the handset so that seniors can hear the caller better. The top ringer volume is a whopping 90dB and also uses a flashing light so there shouldn’t be any problem knowing the phone is ringing either.

The top buttons are used for memory dialing. Just program in the numbers of their favorite people (or people they call a lot at least) and they can reach them at the touch of a button. The first button is orange and would be a great place to program their #1 emergency contact. But, you have to write who is assigned to what number on the base not the handset itself. So, the user would have to memorize the speed dials or be near the base.

There are also other safety features too like a backup battery and emergency calling. Even with it’s few drawbacks,this cordless phone is one of my favorites for sure. 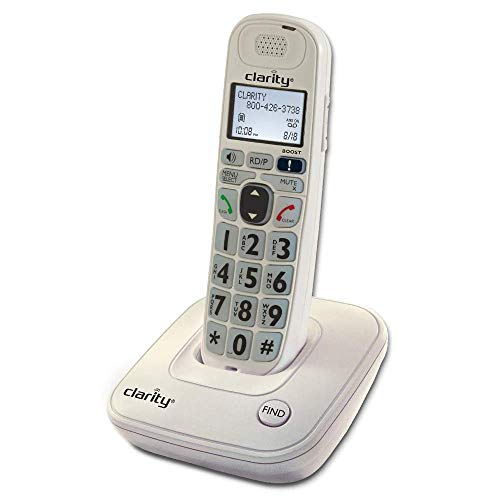 The Clarity D704 is just about as senior-friendly of a cordless phone as you can get. It’s a simpler cordless phone overall with some of the functions being accessed through the screen. This keeps the number of buttons down too.

While on the subject of buttons, it has the large easy to read buttons that I recommend plus they are backlit too. This makes them easier to see in low light conditions like in the bedroom at night. They have a softer touch than some of the others which may be better for arthritic fingers. On the base is a FIND button that makes the handset beep so you can find it.

The LCD screen is backlit too making it easier to see in daylight and night. The memory dialing functions are set and displayed through the screen. You program the number and name and the senior scrolls through them using the up and down buttons. Then, they simply press the dial button when the name they want to call is on the screen.

There are lots of options to make this phone easier to hear as well. Incoming call volume is boosted up to 35db for seniors with even moderate hearing loss. The ringer has 6 total volume settings and 10 different ringer tones. That way, the user can choose which tone they can hear the best.

A few things that older folks may not like about this one. The screen may be too small for seniors with really poor vision. There isn’t a battery backup function either so have a corded landline phone on standby for power outages. The speakerphone is in the handset only – not in the base unit also. 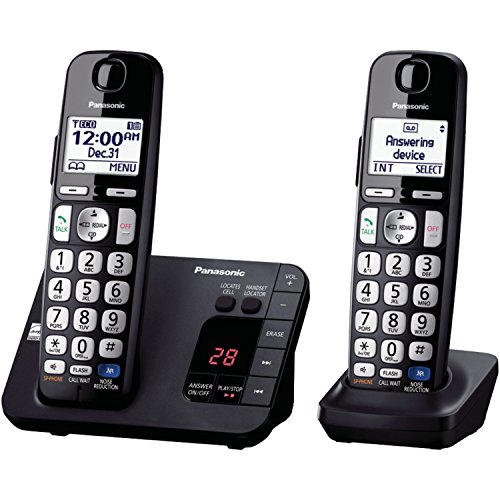 I like this cordless phone answering system setup for seniors who are just having a little trouble seeing and want a full package telephone device. This phone has several features that help impaired vision. But there aren’t a lot of features for sound amplification though.

Like the other models I’ve recommended above, the buttons are easy to read and understand. Plus they have the soft touch design that so many people seem to find more comfortable to use.

The LCD screen on the handset is also easy to read. It uses big, black, and bold print that stands out against the white background. It’s backlit too for varied lighting conditions. This is important because the memory dialing is handled here as well as the caller ID although there is a talking caller ID function too.

The answering machine functions are built into the base and have nice, big buttons. But, the print on them is kind of small. The LCD message indicator is easy to see – even from across the room.

The headset doesn’t have much volume boost to it though. The phone tries to make up for it with a noise reduction feature. This is fine for seniors with mild hearing loss or elderly people with hearing aids. But, it’s not going to be enough for people with more advanced hearing loss. The speakerphone though is nice and loud as is the ringer which has 15 tones to choose from. 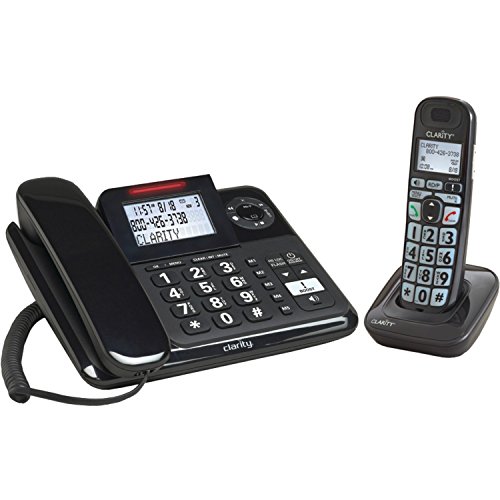 Want lots of features but need sound amplification and easy to see numbers? This is a great phone for that. It has nearly every feature any person would need in a phone: a cordless phone, a corded phone, an answering machine, and a caller ID.

Same as above, it’s got big buttons that are easy to see. There are more buttons than I usually recommend BUT they are easy to use and understand. Remember this for seniors who feel confusion with this level of technology.

The handset is very similar to the Clarity D704 I discussed above so I’m not going to run down all of that again. Just know that it has an easy to read screen, great sound and volume boosting capabilities, and is pretty simple to use.

The corded phone that comes with has the same features too as it is a matched set. Call volume, ringer volume, speakerphone volume, and even the answering machine volume are boosted as well.

You get a choice of 10 ringtones with 6 overall volume levels to ensure the user is able to hear the phone ring. It’s expandable too with additional handsets for other areas of the home.

Before seniors and elderly people will use technology like cordless phones, they must feel comfortable with using it. Often, this why many seniors use corded landline phones instead and refuse to adopt cell phones or smartphones.

Here are the features you should consider.

1. The Fewer Buttons and Options the Better!

So, look for phones that only have basic functions and as few buttons as possible. Functions to look for are: number buttons for dialing, volume buttons or switches, and maybe a hangup/answer button for a cordless model. One touch dial buttons are another good thing to have. This prevents messed up settings or calls to the wrong people.

Also, look closely at the button size too. Arthritic hands will often struggle with pushing the small buttons on many phones. The print is smaller on them too! Phones with big buttons are easier to see and use because they have big bold numbers that often contrast with the background.

3. Ringer Volume Should Be Loud

Hearing the phone ring is, of course, important. Look for a phone with a loud ringer that has a high, repeating sound. If the phone uses melodic tones, get one that has a choice of tones so that you can find the setting that is the easiest to hear. Some cordless phones I recommend also add a flashing light when the phone rings for a visual clue as well.

The models recommended above automatically boost the volume of the incoming caller. Some are controlled by a switch. Typical conversation is about 60 db and there are phones that add 30, 40, and even 50 db to the conversation.

The memory buttons should be as large as possible. Unfortunately, there is limited space on cordless handsets. Some models have a chart on the base for you to write in the names who are programmed into the phone. Some scroll through the LCD screen to use them. It’s important for your loved one to how to call out quick during emergencies.

6. Speakerphones Are A Great Idea for the elderly

Many seniors like to use speakerphones because the volume is louder. My own grandmother used the speaker on her cordless handset for most calls. Although, there is no privacy in this situation because anyone can hear the call.

Vision problems, hearing challenges, and other medical issues create problems in the lives of many seniors. Using a telephone is unfortunately no exception. Phones are their lifeline to the outside world. It is important they have a phone they can use – and can trust.

There are specially adapted phones on the market that help overcome these issues. The best cordless phones for seniors have:

Think you better stick with a regular corded phone? I have recommendations for those too. Click here to read more about those.

I hope this guide helped! Do you have any experience using cordless handsets with elderly people? Is there a model or device that worked well for you? Please share with my readers in the comments below!