Helpful, Easy to Use Phones For Seniors with Dementia or Alzheimer’s

The best phones for seniors with dementia or Alzheimer’s use pictures for automatic dialing, automatically hangup if the phone is left off the hook, and have minimal buttons. Some even have pendants that you can wear around the neck.

Here are my Top Picks: 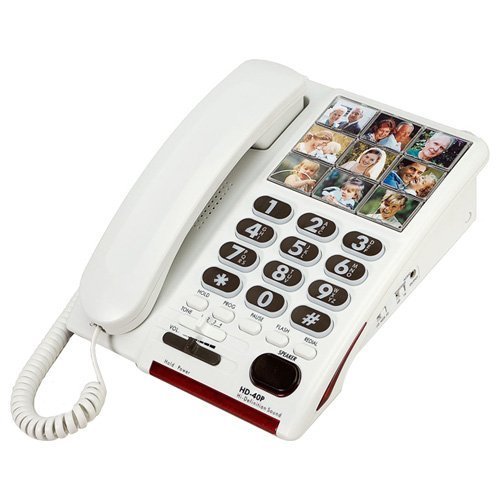 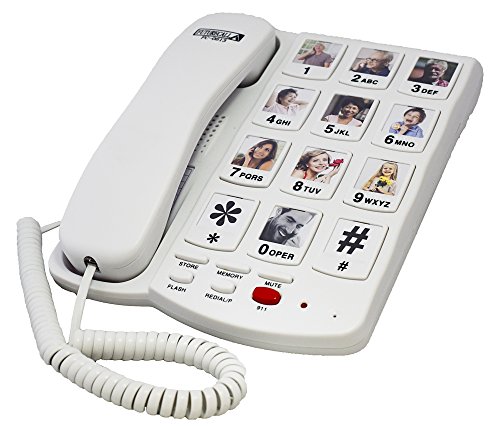 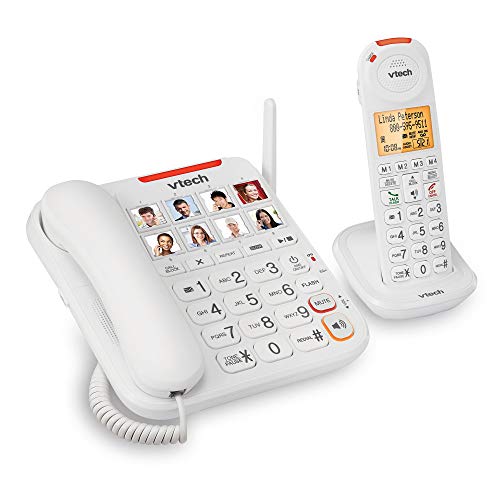 VTech SN5147 Amplified Corded/Cordless Senior Phone System
Go To Amazon.com
Read Review
Income Disclosure: I may earn a small advertising fee (at no extra cost to you) if you purchase items through links on this page. Learn More.

It’s not at all uncommon for elders in the beginning stages of Dementia or Alzheimer’s to struggle with using the phone.

Some days are better than others, of course. Often, the problems show up as forgetting common phone numbers. Sometimes, they may not even remember who is it they are calling. Phones are meant to be one of the most important means of communication. But, they all too often end up becoming a challenging piece of tech for seniors.

There are easy to use phones for seniors with dementia though. Read on to see what options are available. And, how you can find the best one for you or your loved one.

Suggested Phones for Seniors with Dementia or Alzheimer’s

Here are a few of my recommended phones. These phones have a great blend of the dementia friendly features are pretty affordable too.

This Serene Innovations phone was designed for seniors and the features that it offers reflect that. Although it isn’t an ideal choice for all users, it’s equipped with features that make it an excellent choice for patients with dementia. This is one of the most senior-friendly phone models on the market today.

Patients with dementia may find it difficult to complete basic tasks, such as making a phone call. Serene Innovations HD-40P High Definition Amplified Photo Phone is designed to address that. The phone allows you to install nine different memory photo buttons so that you can call someone with the touch of a button.

At times, someone with dementia may not be able to remember the name of the person that they want to call. One-touch photo calling can help people reach their loved ones even when their memory has seriously deteriorated. It eliminates a lot of the confusion associated with phone usage.

It’s common for people with dementia to struggle with other issues, such as hearing or vision loss. These are issues that this phone was designed to address. It also visual ring flashers, which means users can see when they’re getting a call. The numbers on the phone are also over-sized, allowing patients with deteriorating eyesight to read them without issue.

The phone is even hearing aid compatible, which means people with hearing loss will be able to hear conversations.

The photo number storing and protective features make this one of the best phones for people with dementia. Even patients with severe memory loss can use this picture care phone with minimal issues. Phone calls can cause many issues for seniors with dementia and disabilities, and this phone is designed to address that.

When someone is suffering from dementia, they may no longer be able to remember phone numbers. Going through all of the steps of making a call can be difficult, if not impossible. The Future Call FC-0613 phone makes it easier for seniors to dial their loved ones. The phone features 10 “memory buttons” that allow 1×1 pictures to be installed. Each button can be programmed to dial a specific phone number. Making a phone call will only require a single push of a button.

The phone also includes protective features that will allow seniors to enjoy this phone’s features with minimal issues. It has an on/off switch that can disable memory storing. Users won’t be able to overwrite the numbers that have been programmed. It’s also possible to disable standard dialing, which means users will only be able to dial 911 and the programmed numbers. Family members can set up this phone for their loved ones and allow them to use it on their own.

This phone is easy to use and is a good choice for a senior who has memory issues or sometimes gets confused when using more sophisticated devices. The phone can pair with other VTech cordless add-ons such as SOS alert buttons, which makes it useful for people with mobility issues as well.

This VTech cordless phone is designed for use by senior citizens, as is evident by the simplicity of the design and the accessibility features. This is a two-part product, a simple corded phone and a second cordless phone with a charging station.

The phones include an audio assist feature that makes it easy for seniors who are hard of hearing to turn up the volume with just a single button press. The big, clearly labeled buttons are a boon for those with eyesight difficulties, and also for those with dementia.

Learning to use a new feature phone is confusing enough even for adults that are accustomed to technology. For a senior with dementia, it can be an even more frustrating experience. This VTech phone takes away many common sources of frustration. Buttons are large, bold and clearly describe what they do. Digits ‘talk’ so that the user knows that the number was properly pressed, and the call blocking button has a voice guide so that the user understands what is happening. This is a phone that is reassuringly simple to use. 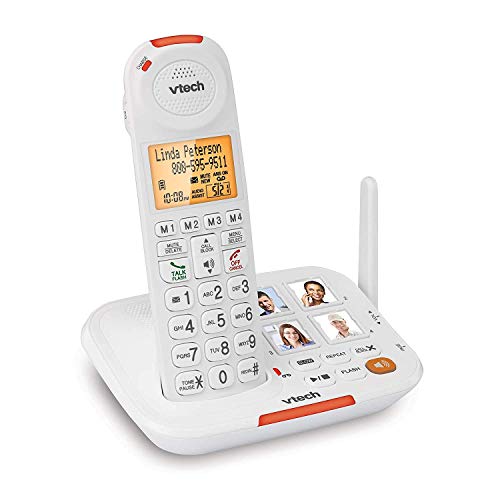 If you are looking for an easy to use cordless phone, it is hard to go wrong with VTech models, and this particular cordless device offers good build quality and a nice set of features.

The VTech SN5127 is an amplified cordless phone with answering machine and smart number-blocking features. This phone is a good choice for senior citizens with eyesight difficulties and also for those with hearing issues or dementia.

As with the other phones in the VTech range, this cordless phone is designed with ease of use in mind. The buttons are large and clearly labeled. There is a visual ringer and a caller-ID feature so the user can both see and hear that there is a call coming in, and decide whether they feel up to answering that caller.

The base station has four large speed-dial buttons that can have photos inserted into them so that the user can simply push the correct photo to call the associated number. For some seniors with memory issues, this is far more convenient and easier to remember than trying to navigate a complex phonebook memory.

The base unit’s buttons are big and tactile, so people who struggle with fine motor control can still use the phone with confidence.

The call blocking feature is something that is often overlooked when people are choosing a phone for their elderly relatives. This feature blocks a large percentage of incoming robocalls, reducing the stress of unwanted calls and offering some protection against scammers. The feature does not claim to stop all calls, but it is still worthy of note as a nice addition on this phone. 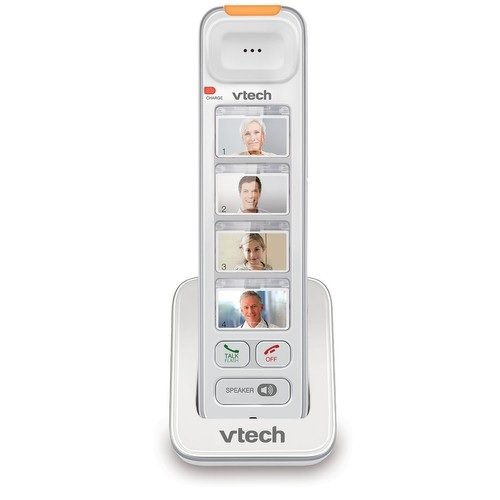 This is one of many devices in the VTech line for senior citizens. As with some of the other devices, getting the phone to work out of the box can be tricky, so this is something that you should buy and install for your loved one, rather than leaving them to figure it out. Once it is working, however, it is reliable and well made. The simple interface is perfect for older users who are having memory or motor control difficulties, but still want to retain their independence.

The VTech SN6307 CareLine phone is an accessory handset that can be paired with the SN6127, SN6187, SN6197 or SN6197 phones to give users convenient access to a phone in an additional room. This phone is easy to use with a full-duplex speakerphone feature and clear audio quality. It is a good choice for seniors with dementia thanks to its simple interface.

This accessory phone is designed with ease of use in mind. Unlike a standard phone with buttons to enter phone numbers and access menu options, this phone cuts everything back to a bare minimum. Even the dialing numbers are removed, replaced instead with four photo speed dial options, and three buttons “Talk”, “Off”, and “Speaker”.

This reduces confusion for people with dementia or who struggle to remember phone numbers and how to operate complex devices. Your senior loved ones can enjoy the peace of mind of knowing that all they have to do is push the button with your photo on it, and they can reach you in seconds.

There are many phone options to choose from. But, if you want to select a phone for somebody with dementia, you could consider a phone with the following features:

Every senior or elder has different needs based on how well they function. Some may need a phone with all of the options above. Some may only need basic features – especially if they are in the early stages of dementia.

So, what are the common problems people with dementia or Alzheimer’s have using telephones? Most, of course, have to do with memory problems and not being able to recall necessary information. Especially in an emergency.

Elders with dementia, or even Alzheimer’s, may sometimes have difficulty recognizing even a very familiar voice. If you are calling your parents or loved ones with dementia, constantly remind them your name and your relationship with them. They may sometimes fail to make that connection on the phone themselves. Frequent reminders are helpful.

Sometimes, your loved ones will start confusing the TV remote control with the cordless phone. They may try to answer the phone by picking up the remote! If this happens, it may be a good idea to pick up an old vintage phone that they may find more easy to use.

Dementia patients may end up randomly calling family and caregivers. It’s not at all uncommon for some to call 10 – 15 times a day even. They do this either due to anxiety or simply because they have forgotten that they have already talked to you earlier in the day. To keep yourself sane and maintain your own peace of mind, think about getting an answering machine and screen these calls. You can always call back your loved ones later. Or call them right back if they leave an important message.

Finding the right phone for your loved one with dementia is a huge help in them maintaining independence. This is also very important for them getting help quickly during an emergency. Picture memory phones are a great way to help seniors get over the frustration of not remembering who they are calling. Quick, easy to access emergency buttons reduce confusion during stressful situations. These facts are especially true for people with early signs of dementia or Alzheimer’s disease. (Check out this article about games you can play with seniors with dementia.) These people need reliable phones they can use to contact people and loved ones.

Tell me about your telephone experiences with seniors in the comments below. Do you have a suggestion to make phones easier to use? Did you find a particular product helpful? Let me know below! Also, if you found this article helpful, I’d appreciate a share on your favorite social site!

Other Guides You'll Want To Read

Join Me on Social!