Should the Elderly Use Shower Curtains or Shower Doors?

Your shower layout matters for the bathroom safety of your elderly folks. So keep reading to find out if your elderly loved one should use shower curtains or shower doors in their bathroom.

Income Disclosure: Product recommendations are based on my personal experience working with seniors. I may earn a commission on items purchased from affiliate links in this guide. Learn More.

As we get older and question our body’s physical capabilities, our thoughts turn to the safety features in our house.

Elderly folks may be rightfully concerned about the layout of their bathrooms since that’s where many falls and injuries occur. If you are looking at making safety modifications to your shower, then you are in the right place for a good read.

This article will discuss the comparisons between shower doors and shower curtains, the pros and cons, and our final recommendations to help you make more educated decisions about making your shower layout safer.

Contrary to popular belief, shower doors aren’t a fad that died away in the 1980s. In fact, many older adults still have shower doors, not for fashion’s sake but safety preferences in their bathroom.

Shower doors are usually professionally installed, tempered glass that slides back and forth to block water flow and provide shower users privacy. On the subject of shower safety, here are the pros and cons of having shower doors.

Shower curtains are common, easy to find, and stylish in their own right. However, let’s take a closer look at shower curtains, where it concerns shower safety for the elderly.

This all depends on other aspects of the shower that haven’t been considered yet, including the threshold. Is the shower a walk-in shower, or is it a tub-shower combination?

We’ve listed a few scenarios and some potential problems with safety equipment.

Shower-Tub Combination with a Shower Door

This is probably the most restricted setup for safety equipment.

Additionally (even though it goes without saying), this severely limits someone’s ability to access a 3-in-1 commode, a Hoyer lift, or a wheelchair for transfers in and out of the tub.

Shower-Tub Combination without a Shower Door

This scenario may not be too bad, especially if the whole setup is up to ADA code. There is still room to get equipment in, including a shower chair or bench.

If the walk-in shower has no threshold, there is even more access for personal assistants, wheelchairs, Hoyer lifts, and commodes with minimal water spillage.

Walk-in Shower with a Shower Curtain

Equipment access is substantial. The shower curtain can be moved entirely out of the way for complete access, especially if the threshold is minimal or even non-existent.

However, you still risk having a lot of water spillage outside the shower, increasing the risk of slips and falls.

Shower-Tub Combination with a Shower Curtain

The shower curtain doesn’t really pose any limitations on equipment. It’s the threshold of the tub itself. A higher tub ledge means less access but possibly less water spillage on the floor.

Shower doors and shower curtains pose their fair share of pros and cons for regular use as safety tools in the shower.

In the end, it is a personal choice made by an elderly individual in combination with concerns issued by loved ones and any relevant professional recommendations made by primary physicians or rehabilitation specialists.

Based on our review, we have made the final recommendations. Selecting a shower door versus a shower curtain is a personal decision you should make with the consideration of other structural factors of the shower.

For example, a shower door can be an effective tool for a walk-in shower but a significant barrier for a shower-tub combination.

Additionally, a shower curtain can be excellent for both a walk-in and a combination, but water spillage risk needs to be assessed based on the shower threshold or tub ledge. In summary, make your decision based on the type of shower layout. 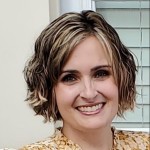 Meredith has worked as an occupational therapist for 9 years and as a content writer for 6 years. She primarily works with the geriatric population, focusing on their rehabilitative needs and instructing caregivers and family members for home care. Her specialties include ADL training, neurological re-education, functional mobility training, adaptive equipment education, and wheelchair assessment and mobility training. She is a painter, a musician, and a mother of 4 who loves spending time with her family,

Enter your email address to subscribe to our weekly email newsletter to get updates on new guides for seniors and the elderly and savings on senior-friendly products. And, of course, we will never sell or share your email address!

Shower Safety
7 Creative Ways To Get Seniors To Take A Shower (And Why They Won’t)
Should Seniors Shower Every Day? (If Not, How Often?)
Learn What To Do After Falling In The Shower [Remain Calm & Assess the Situation]
What Are The Best Showers for Seniors? Safe Showers!
5 Shower Options and Alternatives for the Disabled and Elderly
13 Shower Safety Tips For The Elderly (Increase Safety and Reduce Falls!)
Graying With Grace LLC
6212 Fairview Drive,
Huntington WV 25705
help@grayingwithgrace.com
Contact Us

© Copyright text 2017-2022 by Graying With Grace, LLC. Nothing on this site should be construed as medical advice. I am not a medical professional and no information on Graying With Grace should be taken over the advice of a medical professional. This blog is for informational purposes only and posts are based on my personal opinions. I am a participant in the Amazon Services LLC Associates Program, and as an Amazon Associate, I earn from qualifying purchases.