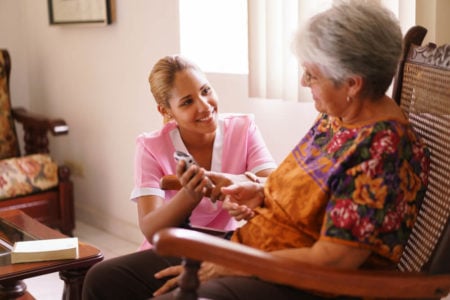 Who knew answering machines were still “a thing”, right? But, these helpful devices have many uses for seniors and the elderly.

For seniors who don’t carry cell phones with them, they are the only way to leave a message if they aren’t home. Also, sometimes, seniors are a little slower getting to the phone. With an answering machine, the caller can leave a message and the senior can call them back.

Finally, they offer a great way for seniors to screen calls which can help protect elderly people from scams as well.

Features To Look For

You’re going to want to make sure you get an answering machine that is easy to use, and nothing is easier to use than a machine with large buttons on it.

If your eyesight isn’t so good any longer then you can have a hard time dialing the phone and using the buttons on something like an answering machine.

With larger buttons, it’s a lot easier to work with the machine you buy and it will be less frustrating to use because buttons won’t get pressed that you didn’t mean to press.

Nobody wants to use an answering machine with a big instruction manual and lots to set up. If there are a ton of instructions, then an elderly person may just ask a family member or friend to set it up for them.

Check the description of each of the answering machines you’re going to learn more about below to get an idea of what the setup process is like so you can go with what you’re comfortable with.

In the event of an emergency situation, you need to be able to call emergency services if something goes wrong. Luckily, there are phones with built in answering machines that allow for you to use batteries as a backup in case the power goes out.

That way, you have a phone that works when you need it the most, and the answering machine will still be able to work so you can get messages from others while you’re waiting for your power to come back on during a time when there’s a storm or other issue causing the outage.

Ok, I struggled with this one a little. There aren’t many options out there to even consider – really I only found 2 and 1 has “non-so-great” ratings. So, to give you some choice, I am also going to include phone systems that have built-in answering machines that are easy to use too. 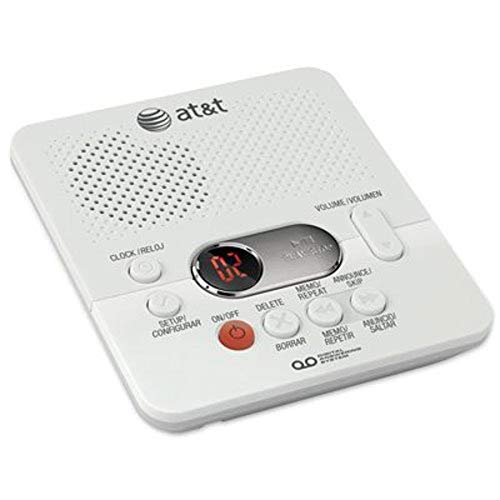 If you are looking for a stand-alone answering machine for a senior, this may be the only option.

It does have some good things going for it. First, the buttons are pretty large and have easy to read print that is bold and black on a white background. The big red numbers on the screen are easy to see too and let the senior know they have a message. To play the message, they just press the large silver number next to the display.

The volume toggle button is easy to see and use also. Plus, the power button is red cluing them into what exactly it is for.

But, there are a few things that may not work for tech-adverse seniors or those with dementia. First, the setup button is right on the main console and could cause setup errors. I also think the multiple languages on the buttons might cause some confusion although this is a nice touch for spanish speaking homes. 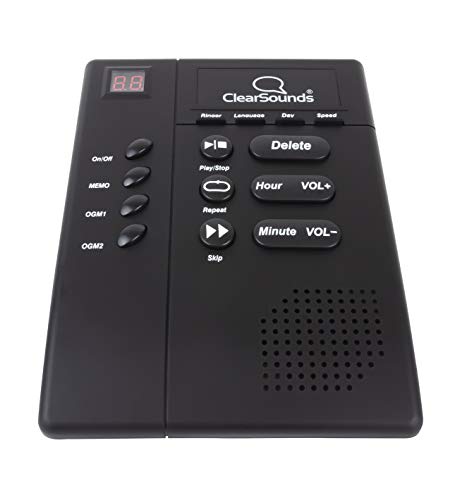 This is about the only stand alone option I could find to consider for the elderly. But, it’s reviews, are.. not great!

First, the good. It has big buttons with big, bold easy to read print. The play, stop, repeat, and skip buttons are intuitive and will be easy for most seniors to understand. Finally, the volume is amplified for people with difficult hearing.

So, now to the negative. Many of the reviews mention the machine failing after a few months of use and poor audio quality. Many said the speaker was hard to hear from.

So, this one is mixed. There are people who love it and many who didn’t! Just know you might be taking a chance with if you decide to buy it. 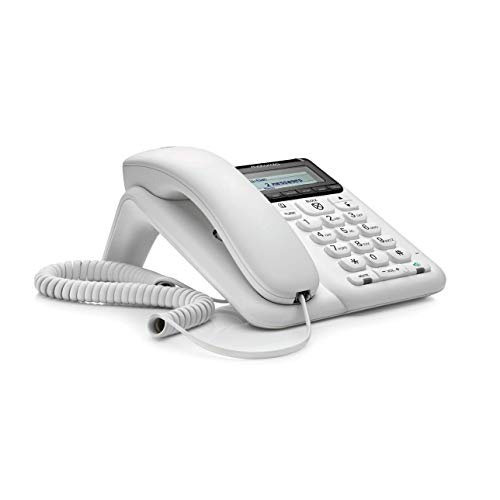 I like this corded phone with basic answering machine built in because it has a familiar look and feel for many seniors.

The phone itself has large chucky buttons that are very easy to see, read, and understand. It has built-in speakerphone for using it hands free and to supplement the volume. Plus it is hearing-aid compatible and has a visual ringer.

Another great feature is the built-in call block. If the senior gets a call from someone they don’t want. They simply touch the “Block” button and the call will be blocked from that point on.

As far as the answering system goes, the screen is backlit and easy to read too. When there are messages, the screen notifies you by telling you how many messages you have in large print. The messages play through the speaker as well.

The answering machine buttons are smaller though and the print is even smaller. They are well labeled as to what they do but some elderly people may have trouble reading them. 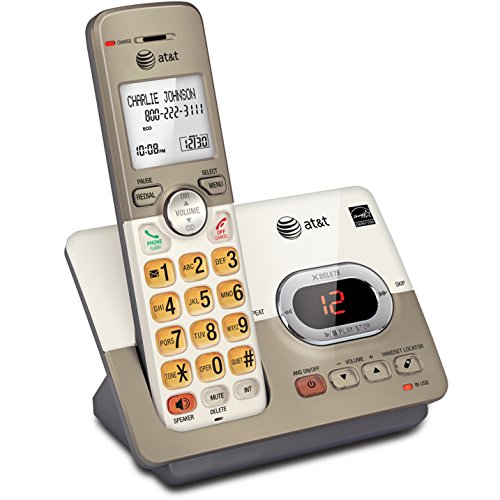 This cordless phone with simple answering machine built into the charging base has a lot to offer too.

The keys are larger than what other phones have and they are brightly back-lit so you can see them without having to be in the light. On the phone itself, there is a screen that lets you see who is calling with bold black text that’s on top a white background so it’s easy to read. This also comes with a speaker phone that is clear and provides high quality sound.

The answering system has a bright red number notification letting you know how many messages there are. All the necessary buttons to operate it are located right there in the same area for easy operation. The setup mode even walks you verbally through recording an outgoing message and general setup. 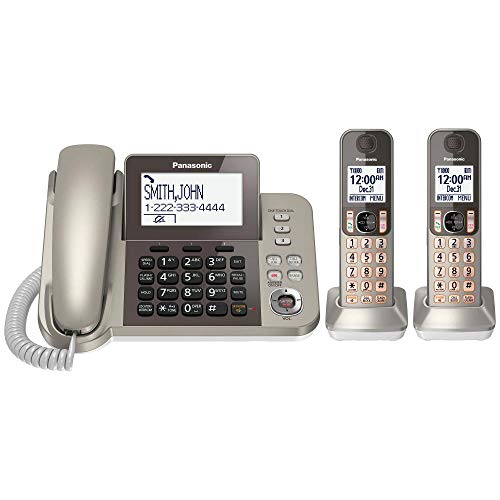 This phone with answering machine has both a corded and cordless headset making it very versatile. Can’t find the handset? You can answer from the corded one then!

This system is easy to use even though there are lots of functions. There is a one touch call blocking system to get rid of pesky callers without too much of an issue. The LED screen has a back light so it can be read no matter where you are in your home.

When messages are left, they are indicated on the large screen on the base and the handsets too. The answering machine buttons are in the bottom right corner of the base which seems to be an intuitive location. The center button plays and pauses messages and the others adjust the volume.

This one is a great choice for seniors who don’t mind more technological products but some might not want to deal with “all those buttons!” 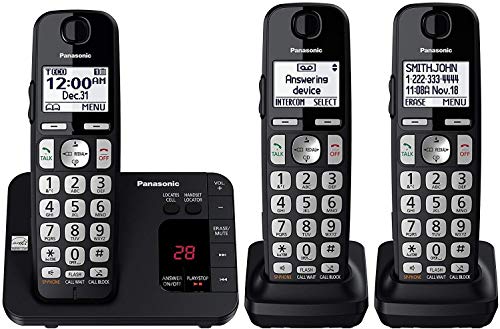 This phone has an answering system included with big and easy to use buttons so you can cycle through and listen to messages with no problems. There is a volume boost control so if you’re having a hard time hearing anything, activate this feature and calls will come in at a volume you’re going to like better.

I like the more simple look of this system. If you just focus on one handset and the base, there aren’t many more buttons than a typical cordless phone system.

The red LED lights indicate how many messages you have and the play/stop button is labeled with red arrows so that their function is clear. Be careful though with the answering machine on/off button. It’s right next to the play button. 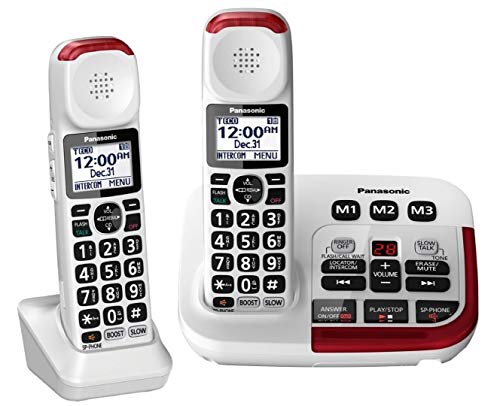 If you are looking for more of a feature packed complete phone system for a senior, take a look at this one from Panasonic.

As far as the answering machine goes, there are several buttons but the on/off and play/stop buttons are easy to find at the bottom and are clear and easy to see. The LED message indicator is located in the middle when it’s time to listen to your messages.

A Couple Of Tips On Answering Machines In General

Hopefully you now have a better idea what to look for when shopping for basic answering machines for seniors. I wish I had more options to give you but there aren’t many choices out there.