Digital voice recorders have lots of uses for seniors from recording reminders to preserving family oral histories. Voice recorders for the elderly should be simple to use, convenient to carry, and have great audio quality with large buttons. Some of the easier to use models are in the article below. 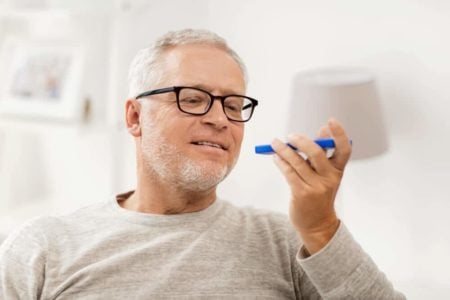 The new technologies can help with memory loss or even provide gentle reminders when needed. Some examples include alarms, notepads, and voice recorders and they can play a key role in the lives of people with dementia. They help promote independence and autonomy, manage potential safety risks around the home, as well as reducing stress.

Here are the top 5 senior-friendly recommendations for voice recorders.

The digital voice activated recorder by Dictopro is highly portable, which means that it can be taken virtually anywhere because it has a housing that’s made from aluminum. It means that even if an elderly user was to drop it frequently, it wouldn’t lose its functionality and efficiency.

It is also compact enough to fit virtually anywhere. It also features two highly sensitive microphones, which means that it can record low-volume sounds and voices. The microphones are so sensitive that voices can be heard in recordings even when they are up to 40 feet away.

The voice recorder can record for up to 582 hours. It turns off automatically after 2 minutes if it fails to detect activity. It can record landline telephone conversations due to the highly efficient in-built speakers.

The Sony ICD-PX470 is easy to use and understand, which is why it is ideal for seniors. If the user makes a recording on the device, it can be easily played back. An elderly user can make use of this feature to remind themselves of things.

The device allows users to record in both MP3 and Linear, which means that it can be made to function according to one’s specifications. It has a sensitive microphone that records even faint and low-volume sounds. However, it doesn’t record background noises.

The Sony ICD-PX470 optimizes vocal frequencies, which means that high volume recordings are automatically adjusted into a lower volume. Users will also enjoy the fact that it is possible to search through the data on the device.

The Olympus VP-10 is one of the best voice recording devices for seniors because it has a smart and innovative design. It features an omnidirectional stereo system, which means that it can efficiently record noises and voices.

The integrated microphones eliminate white noises so that when audio recordings are played back, sounds and voices can be clearly heard. The Olympus VP-10 is straightforward to use since it just requires the single touch of a button.

The Olympus VP-10 is not only great for use by the elderly but also can be a great option for regular users to use in meetings since it has 4 recording modes. To download the recordings, all you need to do is plug it into a PC.

The Olympus WS-853 is one of the best voice recorders for seniors since it is quite easy to use – despite the number of buttons. It automatically adjusts microphone sensitivity, which means that if a user shuts down the microphone, the volume is automatically turned down.

It is also possible to adjust the display according to the needs of the user. To make your job easier as well, it has a USB connection, which means that you can easily store and transfer data anywhere and wherever.

The Olympus WS-853 doesn’t require a cable, which means that an elderly user does not have to worry too much about storing it in a particular place. It has a protective cover for the housing, which means that it doesn’t get easily damaged even with regular use.

The Sony ICDUX560BLK Stereo Digital Voice Recorder is an easy-to-use digital voice recorder that any senior will love using. It features a sleek design, which means that it is not only easy to handle but also use.

It has large buttons, which makes it one of the best options to use for the elderly. It also has a large display with all the information you need. It is portable, which means that it can easily fit in small purses or even back pockets and your elderly loved ones can carry it with them wherever they go.

It comes with 4GB storage, which means that it can handle many hours of recording. If the 4GB storage is not enough, you can use a larger capacity microSDXC card with a capacity of up to 64 GB.

What to Consider When Looking for a Senior-Friendly Voice Recorder

You need to consider several factors before you buy a senior-friendly voice recorder. Some of the factors below might be more important than others in your eyes, but the best way to find one that suits you or the person being cared for best is to compare several different models.

The recording and audio quality determine how clear the recordings will be. The microphone quality and bitrate will also ensure that the recorded sound is crystal clear. Some voice recorders will even have a variable recording setting, which means that with just a simple press of a button, you can record the audio quality you need, which is why such voice recorders are ideal for seniors.

3. Simplicity and Ease of Use

The menu and navigation of the voice recorder should be easy to use. The user should be able to easily choose the right settings as needed and find the recorded files for playback.

4. Easy Connection to a Computer

The voice recorder should be able to easily transfer audio files from the device to a laptop or computer for storage, backup, or even further transfer to a recipient. Voice recorders of today have integrated USB plugs that easily slide out of the recorder and subsequently plugged into the computer for the transfer of files.

A senior-friendly voice recorder should ideally have a hooking point for a wristband or a lanyard for the neck. A voice recorder is a very tiny device, which is why it should be held on securely by the user, especially when that user is a senior or elderly individual. An attached wristband or neck lanyard helps keep the recorder tied to the user so that even if it slips out of the hand during use, it doesn’t fall down and get broken.

The discovery of the best ways to help people with dementia deal with the condition is still in the early stages. However, according to research, reminiscing about times-gone-by can make a difference. One effective way to do this is to record memories using a voice recorder.

The Alzheimer’s Association believes that therapy is a great way to empower those with dementia by accessing long-term memories. One of the best ways to access a person’s long-term memory is to make audio or even video recordings before the symptoms become worse.

Seniors that reflect on their life experience are not only surprised but also appreciative of the things they have been through. Thinking about and discussing the past is also a great way to keep their minds engaged and active, which is a great way to reverse or at least slow down the effects of dementia.

Sharing stories also leads to better communication, which in turn has been shows to lower care-related stress especially in people with dementia. It also helps prevent caregiver burnout along with its negative effects on the relationship with the person being cared for.

The key benefit of sharing stories is the bond that it creates between people. Having somebody to share life stories with is a great way to improve a person’s sense of self-worth, which is great for the mental well-being of a person suffering from dementia.

If you are a senior or have an elderly loved one that’s suffering from dementia, you should consider investing in a voice recorder. All the 5 devices featured here are all excellent options and you should compare different devices to find the right one for you or your loved one.

3 thoughts on “Simple Digital Voice Recorders for Seniors & The Elderly”